May 20, 2017 fell on a Saturday. G had a dance recital and we went out with friends at night. The weekends were always a reprieve. The doctors and nurses weren’t in their offices. The radiologists and radiation machines were closed. We could take a break from the anxious waiting for return phone calls and emails and pretend cancer wasn’t all that we were thinking about. Without the medical stuff, the rhythm of the day was familiar and we could pretend we weren’t afraid.

Matt and I never talked about our fears. We never even acknowledged to each other we were afraid. Maybe Matt wasn’t. I truly do not know because neither of us ever brought it up. Fear was not an option. Fear meant defeat. Or worse, it meant that we didn’t believe in what we were doing.

The other day a storm ripped through my neighborhood. It snapped power lines, upturned tremendously sturdy trees, and caused widespread damage in a matter of about ten minutes. The storm was like nothing I’d ever seen before and some vague, ill-defined fear—one I hadn’t felt before Matt got truly, truly sick—made it hard to breathe.

After the storm, the kids and I stood on the deck to survey the damage. The sky had cleared and the humidity had broken. It was easier to breathe. We hoped to find a rainbow, but didn’t. Instead, we saw the sun glowing from behind the trees. The shape we saw wasn’t exactly a heart, but we decided to take it as one anyway.

In my about me page on this blog I said I didn’t have the words to explain what this feels like. That’s still mostly true. Before this post-hope year, I thought grief was simply sadness. I didn’t know how intimately grief was linked with fear. Because I now know that grief is waking up not knowing what to expect in the morning. It’s being stripped of the certainty that the storm will pass without toppling any trees. It’s being unable to hide from that panicky, fluttery feeling because even the weekends have an unfamiliar rhythm.

Last year, Matt and I avoided fear. Avoided talking about fear or even acknowledging that we were afraid. This year, I cannot avoid the fear. It is as relentless and unforgiving as the storm that swept through my neighborhood. And in this post-hope, grief-stricken year I can no longer pretend there won’t be another storm, and I can’t ignore the possibility that it might leave scars with no rainbow in view. All I can do is acknowledge the fear, look forward, and make the best of the light shining through the dark clouds.

Because fear doesn’t have to mean defeat. Fear is not the opposite of hope. 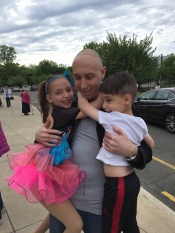