Once again, I feel like I contradicted myself. In one post, I wrote about how Matt never lost the ability to keep in contact with his old friends and in the very next post I wrote about how his love of going out faded. The best way I can explain this is to shrug and say that’s brain cancer. One moment contradicts the next. The two things are just distinct enough so that one part of him could be impacted, while the other remained preserved. (Or, I should have heeded the advice I read not to write about an event without allowing for a few years of distance.)

The contradiction also speaks to something about me. How closely I watched Matt and compared his every word and action against the version of him I thought he’d be if we never heard the words brain cancer. It’s an unfair comparison, especially to Matt, but I couldn’t accept that anything about him had changed. Some part of me probably thought if I could just find all those missing pieces, stolen for whatever reason, I’d fix everything, make the cancer disappear. It’s not logical, but I never promised to be.

We went to the city on May 7, 2017. Sorting through text messages and emails and photos doesn’t give me a single clue as to what we did or why we went. All I know is that I drove and Matt took a picture on his phone of a building with faded lettering.

It’s just a picture. Matt didn’t text it to anyone, he didn’t post it on social media or blog about it for everyone to read, but I know it was meaningful to him. It’s the building in which the company that has been in his family for three generations, the one his father developed and the one he was excited to grow, had its beginnings.

In terms of symptoms, the days in May and June are the easiest. As far as we knew, polio was working to shrink the tumor, Matt’s immune system was targeting any floating cancer cells, Avastin was keeping the swelling at bay. We had every reason to hope. But it’s only now, in writing this post, that I see how differently Matt and I handled these hopeful months. I spent the days looking backward, trying to return to the way we’d been before cancer ever invaded Matt’s brain. Matt spent the days looking forward, trying to secure a future for the company and legacy he loved.

It’s not lost on me that part of the reason I’m writing our story, besides all the noble reasons, is because I’m still looking backward. Like last year, I’m not quite ready to accept anything has changed, or to let him go.

I’m not sure what the lesson is there. Maybe it’s as simple as you do what you can to survive. 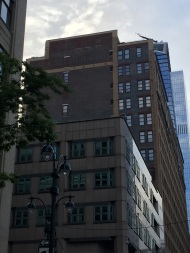